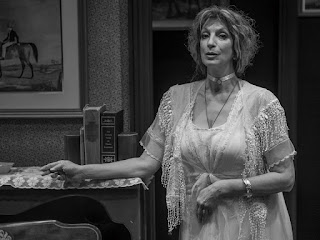 Erica Sarzin-Borrillo
Eugene O’Neill was awarded the 1937 Nobel Prize in Literature and the Pulitzer Prize posthumously for ”Long Day’s Journey into Night.” It’s an autobiographical play in which O’Neill unveils the family secrets of his devastatingly dysfunctional family. All of these characters are chained to their pasts. Their dashed hopes are fodder for the disillusionment, depression and despair that O’Neill describes in his play. Their inability to forget and forgive fences them in as much as drug addiction and alcohol.
It’s long! Four acts including two ten-minute intermissions! And it’s dark serious drama that’s harrowing and disturbing. Even so there is a euphoric aspect granted a lover of theatre who is privileged to see a truly great production of a great work such as this one.
Erica Sarzin- Borrillo is luminous as Mary Tyrone. Her performance gives us a meditation on the devastation reeked upon a family because of a woman’s addiction to the medication prescribed for her by her physician. The subsequent loss of self in a foggy sea of memories allows her a return to childhood, which disallows her presence in the lives of her loved ones.
As Mary’s husband James, the tight-fisted patriarch of this clan, Ed Baierlein presents a rock solid portrayal of this man who stubbornly clings to his wallet even in the face of health issues with the younger of his two sons. Stephen Kramer draws upon a deep wellspring of stage memories in describing Tyrone’s dissolute actor son James.

Zachary M. Andrews’ sensitive portrayal of Edmund Tyrone the character representative of O’Neill as a young man here embodies the struggle to be true to his own artistic sensibilities in the midst of the melee. 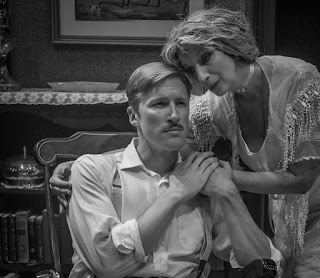 Director Baierlein succeeds with the use of layered dialogue as no other director in town. The first time I became aware of his talent in this regard was in his astonishingly well directed production of “Hurly Burly” in 1986 when Germinal was still in the space downtown.
This reviewer has seen numerous versions of “Long Day’s Journey into Night” including one in which the pacing was so slow a woman dozed off and crashed to the floor.
You owe it to yourself to experience the greatness of O’Neill’s masterwork in Germinal Stage Denver’s truly grand production.

Germinal Stage Denver, located at West 44th Avenue and Alcott Street in Northwest Denver, presents
LONG DAY'S JOURNEY INTO NIGHT
This is the third production of the theatre’s 39th season.
Performances Friday ($21.75), Saturday ($23.75) and Sunday ($19.75) through June 9th.
ALL PERFORMANCES AT 7:00Marlowe's Musings