Campy, kitschy and kooky, Vintage Theatre’s “And Then There Was Nun” is a panic!
She’s got Bette Davis eyes!  Of course I’m referring to that funny, funny actor, Bob Leggett who’s playing Sister Bette in Vintage Theatre’s rollicking new production of “And Then There Was Nun.” Leggett is outstanding as that Bette we all know and adore of “What Ever Happened to Baby Jane?” fame. Leggett gets loads of laughs just rolling those big ol’ Bette Davis eyes.
Her sister, Joan (Crawford) is played with tongue in cheek by Shane Delavan.
Decked out in an ante bellum hoop skirt with tiny four leaf clovers Preston Britten is the hilarious Vivien Leigh of “Gone With the Wind” fame. 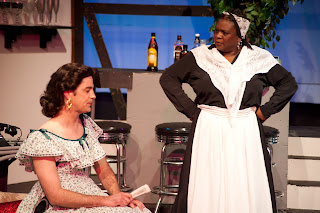 Preston Britten and Geri Crawley
All photos by Denver Mind Media
Geri Crawley is smashing as the incahation of Sistuh Hattie (McDaniel) of the same suthuhn plantatiuhn as Mistuh Britten’s Scahlett.

Abby Apple Boes is stunning in her portrayal of Sister Gloria (Swanson.) As the aging star with the bulging eyes always craving her close-up, Apple Boes delivers a juicy performance that’s delicious to the core. 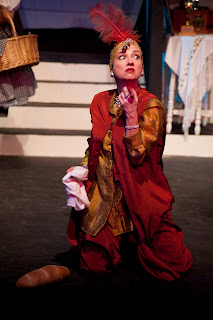 Abby Apple Boes
Cathy Washburn’s Sister Katherine (Hepburn) gets high marks as well standing out among these “loons!” (Sorry!)
In fact the whole cast has gotten into the habit of being deliriously out of control as they portray this convent full of the aging Hollywood Sisters of Saint Andreas. Directed with a light touch and a quick pace by Peter Hughes, this offering is a comedy directed at anybody who loves vintage movies and has even one funny bone in his body. 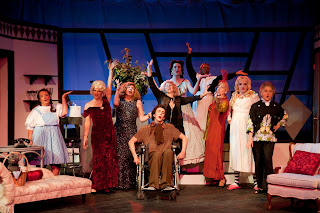 The cast of "And Then There Was Nun"

Richard T. Witter’s and Bruce W. Gilray’s play is a send-up of Agatha Christie’s book and subsequent screenplay. As directed by Mr. Hughes and “fleshed out” by this cast of Hollywood nun-stars, the show twinkles and shines!  The script sticks to the bare bones of Christie’s murder mystery as one nun after another meets the grim reaping hand of “Mother Paramount.”  The very funny script also mirrors Neil Simon’s script for the 1976 “Murder by Death” in which a pun-slinging all star cast of famous literary detectives met their maker at the hands of a maniacal Truman Capote.
I defy you, dear reader, to find all the references to the classics of treasured cinema. There are so many of them that you will not believe your ears. Trust me, dear reader. It’s laugh-filled to say the least!
Vintage Theatre presents
"And Then There Was Nun"
May 17 – June 16, 2013 Fri/Sat at 7:30 p.m.; Sun at 2:30 p.m.
$25 ($20 advance) 303-856-7830 or online at www.vintagetheatre.com
Vintage Theatre, 1468 Dayton St., Aurora 80010
Marlowe's Musings