Motherhood Out Loud
The Avenue Theatre: Through Mother’s Day and may extend again!!!

In the intimacy of The Avenue Theatre this play with its superbly written monologues gives us heart opening gems about Mom that are sometimes heartbreaking and sometimes just plain sparkle with great humor.
The stellar cast includes such talents as LuAnn Buckstein, Jane Shirley and Cindy Laudadio-Hill. New to this reviewer were director Wells’ fabulous new discoveries : Megan Heffernan and Samantha Provenzano. The male element is provided by the brilliant actor Jeff Kosloski. This actor’s monologue about a character who’s a gay papa is unforgettably poignant.
The monologues in this play are full of lots of maternal moments that get illuminated by writers who work in film, theatre, television and newsprint. One can hardly imagine a better-written evening and director Wells has breathed life into the piece by his innovative reimagining it theatrically to ‘show’ rather than just ‘tell’ these stories.
One scene involving a mother’s love for a son who has been deployed to foreign shores is extremely moving. Although one and all involved in this production are stellar, the show is led with magnificent aplomb by stars: Jane Shirley and LuAnn Buckstein. Seth Alison’s lighting design adds a different kind of ‘star’light. Bravo! I have only one criticism of “Motherhood Out Loud.” And it’s the title!
I couldn’t imagine any play with this title being of interest to me or my readership. How wrong I was!!!!!!!!
This show will make any day Mother’s Day and if you take her you’ll be glad you did. If she’s not in town you’ll be makin’ a call!

This show about Moms reminds us… you only get one!  Run to see it! 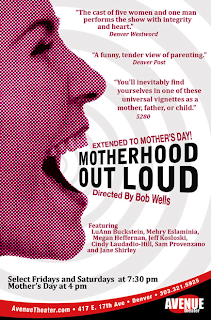