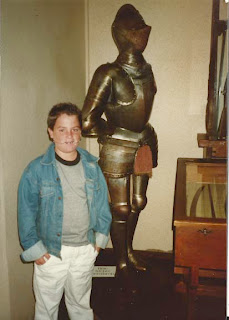 Brian Colonna
“A Knight to Remember” relates the tale of a young man who now 35 has never been as happy as he was in fourth grade. Brian Colonna’s autobiographical illumination of his memories of his fourth grade crush on a girl who didn’t know where to put her hands touches. Even the orthodontist from his childhood gets into the mix by way of a tee shirt bearing the inscription: “Stainless Steel Sex Appeal.”
Simplistic-seeming yet saucily savvy, Colonna’s script allows for the intervention of other cast members who take HUGE pleasure in deftly breaking all theatrical rules with childlike abandon.  Only the audience takes more pleasure in their antics than they do! Examples of these are: When you don’t have lines you don’t talk. Or if you are not in the scene then you don’t stick your head out from the side curtain in view of the audience. “A Knight to Remember” is a return to childhood with reminiscences based on a book about “Knights.” It’s part “Fellini- Amarcord”(“I Remember”) and part The Marx Bros’ “A Knight at the Opera”  … without a lot o’ Spam. (Sorry!) There is grandiose movie music that gives the auditory illusion of Hollywood chivalry at its most florid. 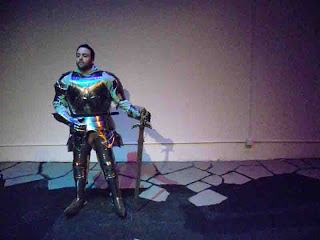 Brian Colonna
In one scene Sir Brian appears as Sirs Lionel, Sagramore, and Dinadan in projections of various lobby fotos of Vanessa Redgrave’s Guinevere singing “Take Me to the Fair.” As we listen to the voice over of Julie Andrews from the Broadway version of “Camelot” we get one of the most hilariously correct similes in the show. “Her voice is like a clean white shirt drying in the sun.” Beyond that there is an amazing suit of armor and a chivalric mount that will make the producers of “War Horse” weep. 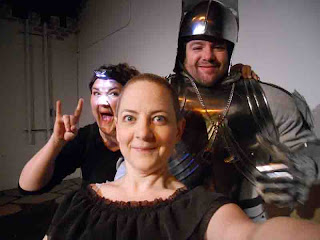 Hannah Duggan, Erin Rollman and Brian Colonna
A pencil experiment in which the adorable Hannah Duggan raps :“where’s my PENcil, where’s MY pencil, WHERE”S my pencil” while strutting around with a plush black chair pasted to her butt stuns. Duggan’s hilarious turn as the show’s onstage technical director for sound, lights and constantly changing and deliciously fluid set design is a hoot!
Erin Rollman is her usual brilliant self in numerous roles including both of Brian’s parents, his fourth grade teacher and his fourth grade squeeze as well as a thoroughly minimal and delightfully innovative Lady of the Lake.
Although I didn’t guffaw a whole lot in this one ... even after the show I had to sternly tell my happy face to stop smiling because it was getting EXTREMELY painful and I was starting to fear that the tragic face of the critic would never again be mine. Happily the tragic has returned and all is in critical condition again.
To paraphrase the Bard’s “Midsummer Night’s Dream”: ”The short and the long of it is  - Buntport’s show is preferred.”
It’s comic caviar on crackers!
("Not much of a cheese shop tho!")