With his direction of “Man of La Mancha at Arvada Center Rod Lansberry has achieved The Impossible Dream – a pitch perfect production of this beloved Tony Award-winning musical.
William Michals’ portrayal of Don Quixote/Cervantes stuns us with his magnificent baritone and riveting stage presence. His singing of “The Impossible Dream” is rousing and indelible.


Opera diva Jennifer de Dominici brings the dulcet tones of her soaring soprano to the part of Aldonza/Dulcinea. Brava! 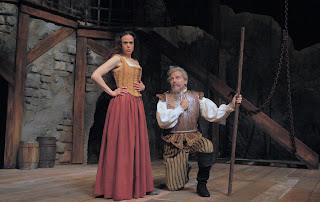 Eschewing the traditional casting of a short squat fat Sancho Panza, Director Lansberry opts for the slim, tall physiology of Ben Dicke. Visually jarring at first, Dicke endears with his bashful, goofy take on the character. 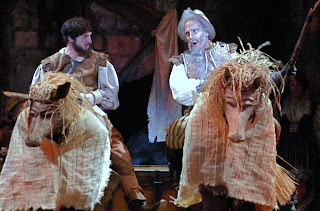 Left to right: Ben Dicke and William Michals
That said dear reader, what you must know is that every single member of this cast turns in a magnificent performance. Rob Costigan’s barber, Craig Lundquist’s Innkeeper, Sue Leiser’s Housekeeper, Jeremy Sortore’s Padre and Markus Warren’s Knight of the Mirrors are all exceptionally well portrayed. The cast list goes on to read like a who’s who in Denver Theatre including the stellar talents of  Robert Michael Sanders, Mercedes Perez, Mark Rubald, Daniel Langhoff, Danielle Porcellini, Jessica Hindsley, Chris LeBeau, Tim Howard, Joanie Brosseau and Andrew Diesner. 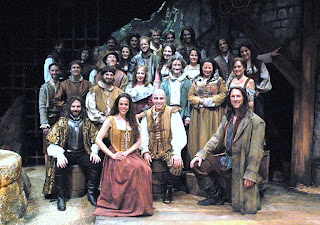 The Awesome cast of Arvada Center's "Man of La Mancha"

Maestro David Nehls starts out tickling our ears with a single mandolin played onstage by one of the actors. It’s only later through incremental shifts in the volume that we arrive at the swelling grandeur of this stirring score. In this way Nehls’ music direction is in perfect alignment with Lansberry’s directorial decision to make us as audience feel that everything in the production – even the music – originates in this filthy dungeon.
The choreography by Kitty Hilsabeck is correct and precise in modestly serving the concept without ever slipping into excess.
The scenic design by Brian Mallgrave is quite simply his best to date. That’s quite a statement having seen the exquisite work this artist has done over the years. However … this time he has outdone himself. The dungeon he’s created is a sprawling masterpiece that spans the length and width of the stage using every square inch to great effect.   With its lanterns dangling from the ceiling and its creaky drawbridge of a staircase Mallgrave allows us the illusion of a subterranean cavern into which the Grand Inquisitor sends his minions to lead prisoners to their death.
Shannon McKinney’s lighting design dazzles.

The direction of this musical by Rod Lansberry is without equal so far this season. The maestro’s incomparable vision is stamped on every aspect of each scene.
It’s electrifying!Marlowe's Musings

Posted by David Marlowe Theatre Reviews at 8:45 AM