"DOYLE AND DEBBIE" DOES DENVER! 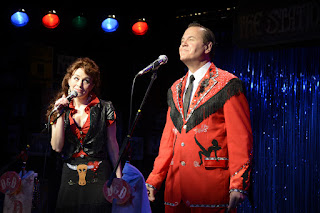 It looks as if The Garner Galleria has another one of those shows that will run forevah!!!!!!

Bruce Arntson gets high marks for his intentionally goofy performance as Doyle, a third rate country western singer has-been who's makin' a come-back! Doyle's womanizin' his way west with annoying idiocyncracies and a ten gallon hat full of braggadocio. Arntson, who created the show, also wrote the funny, if very ‘politically incorrect’ lyrics.
Jennifer Blood is Doyle's third Debbie. A single mother hoping to make it to Nashville on Doyle's coat tails, Blood's Debbie  provides the exact right pouty feminine contrast to Doyle’s grinning male chauvinism. Ms. Blood’s delivery of “The ABCs of Love” drew rapturous applause and lots of laughter from the audience on press night.
“D and D” was a little slow getting out of the chute on the night this reviewer was in attendance, but once it did it thundered down the macho sh*#head racetrack created by Mr. Arntson (as writer) like a thoroughbred. Arntson's lyrics are deliciously funny in a charming redneck sort of way. The only problem is that sometimes the patter is set at such a frenetic pace you aren’t able to catch all the jokes. That's not to say that the delivery by Ms. Blood and Mr. Arntson is not superb. It is.
These two artists are at their best singing such soon to be classics as “Think of Me When You’re Screwin’ Other Women” and “Fat Women in Trailers.”
Kevin Depinet’s Honky Tonk scenic design will put you in mind of that of The Denver Center Attractions runaway hit “Always, Patsy Cline.” Depinet gives us a dive somewhere on the lonesome trail of country western wannabes and has-beens. The walls are plastered with beer adverts and autographed posters.
Annie Freeman's costume design is spot on. Freeman has bedecked Ms. Blood in a fringe-edged mini dress featuring a steer with one of its horns through a bleeding heart. Mr. Arntson’s shirt features female silhouettes similar to those you may remember from mud flaps on those fourteen wheelers toolin’ down I-25.
The guitar playin’ makes “I Ain’t No Homo But You Sure Look Good to Me” what Montanans call a true 'near-near' song.  ('Near-Near' bein' the sound the fingers make on the strings of course.)
Arntson’s country scattin’ is outstanding and his yodelin’ at least as good as that of Julie Andrews in “The Sound of Mucous.”
What other musical can one leave humming the tune of a song entitled “Fat Women in Trailers?”

Posted by David Marlowe Theatre Reviews at 9:27 AM