At the start of Larry Shue’s “The Foreigner” Froggy LeSeur (Michael Leopard) and Charlie Baker (Jeremy Palmer) arrive at a Georgia fishing lodge. Since Charlie is scared to death of interacting socially with other people Froggy tells everyone at the lodge that Charlie is a foreigner who doesn’t understand English. In this way Froggy’s bashful buddy is able to be privy to what’s really going on in this little Georgia resort. 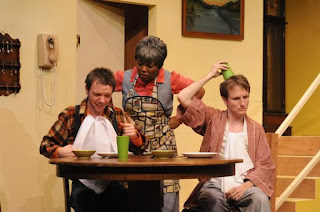 L to R: Daniel Traylor, Kathi Wood and Jeremy Palmer (Photo credit: Michael Ensminger)
The show is mostly just frothy fun that had this reviewer doubled over with laughter. However… that doesn’t keep it from having a social conscience about the existence of hate groups in our country!
Director Edith Weiss has cast this show impeccably and elicited performances from her fine cast that are golden.
The crisp clear sounds of folk fiddlin’ and pickin’ came through the superb acoustic perfection of El Armstrong’s sound design right up until the soundboard crashed backstage with three loud pops that sounded like gunshots. The cast didn’t even miss a beat and kept right on cracking the audience’s funny bones as if nothing had happened. These actors are true professionals.
Although the cast is endearing to a man/woman Jeremy Palmer steals the show in the role of Charlie Baker.
This is a wonderfully wacky evening of theatre you won’t want to miss. Marlowe's Musings