War Horse
The Buell Theatre: 1/8 – 1/20
One hates to be a neigh-sayer but in everything save the outstanding puppetry and technical prowess “War Horse” disappoints.

The story begins at the start of World War I when Albert’s horse Joey is auctioned off to the cavalry. After being shipped to France Joey is sent directly to the front lines. Albert is too young to enlist but sets out despite his age to find his beloved horse.
Knowing that this show was received with critical acclaim both in London and New York this reviewer has waited excitedly for “War Horse” to appear upon the Denver stage.

The Tony Award winning play was worth waiting for due to its equine stage machinery and technical virtuosity. Three exquisite actors breathed life into Joey and each of the other magnificent horses created by Handspring Puppet Company.

However… due to a directorial pacing that only canters when it should gallop and some actors who found it difficult to speak the words of the script clearly the show became tedious rather quickly.
This was exacerbated when the show was stopped part way through Act II due to a problem backstage which has thus far remained secret. Most of the audience stayed, but a few did leave during this second approximately ten minute long enforced intermission.
If powerful acting and direction could have accompanied the outstanding technical work and superbly created equine puppets this show would be a thoroughbred. Perhaps the producers felt that Joey’s triumphant run for the roses in London and New York have earned him a more sedate life going out to pasture in Denver.
See it for the puppets. Marlowe's Musings 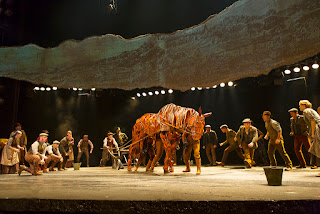 Single tickets for WAR HORSE start at just $25. To charge by phone, call Denver Center Ticket Services at 303.893.4100. TTY (for Deaf and hard-of-hearing patrons): 303.893.9582. Groups of 10 or more, please call 303.446.4829. Additionally, tickets may be purchased at the Denver Center Ticket Office, located in the Helen Bonfils Theatre Complex lobby. Buy and print online at denvercenter.org.
Posted by David Marlowe Theatre Reviews at 4:36 PM