Christy Montour-Larson is the director of “Time Stands Still.” Need I say more?
When one sees that this lady is in the director’s chair he can be assured that the production will be grand. As usual the casting is impeccable and the technical work overseen in detail. 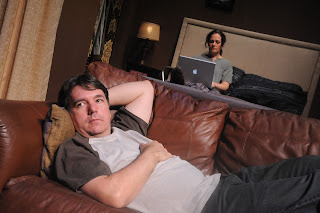 Tara Falk plays the photojournalist at the heart of the show. Michael Morgan is her foreign correspondent amour. David Russell plays a publisher friend who has a new squeeze named Mandy,played by Devon Bloom.

Ms. Falk comes with credits from Broadway and Off Broadway as well as several for her work in television. Falk is a superb actor and flawless in her delivery of the part of Sarah Goodwin. Devon James is superb as the ditzy and utterly enchanting Mandy Bloom. Michael Morgan is outstanding in his performance of the role of James Dodd, the foreign correspondent boy friend of Sarah Goodwin. David Russell is brilliant as Richard Ehrlich. His portrayal gives us a man of sharp intellect with a sterling sense of humor.

Donald Margulies’ play is thoroughly engrossing and perhaps reaches for a little more than it can deliver.

At the top of Act Two Sarah and James get married and are seemingly ready to be done with the foreign wars. Richard and Mandy are pregnant. Very shortly Sarah realizes that she is not willing to give up her life as a photojournalist and James reluctantly looks elsewhere for a wife. His choice, a Cambodian E.R. doctor with a twelve-year-old kid.

There are some very large philosophical questions that are raised in the course of the play that are either unanswered or simply glossed over. The most disturbing of these is whether it would be better to help a critically injured person and save him/her or to get explosively illustrative fotos that may hopefully impact the ending of the war.

What Margulies does succeed at is showing the need to find one’s way in life as early as possible since Time Stands Still for no one.

When one is constantly looking at Life through the camera’s lens he can capture moments in Life but never experience it. 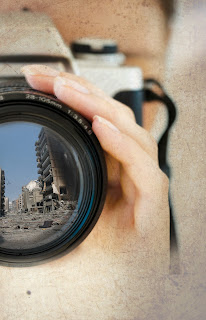 The final moment of the show points this up with devastating, heartbreaking clarity.
This is an outstanding production. You owe it to yourself to see it.
Not to be missed!

Call 303-623-0524 or go online at curioustheatre.org for tickets.
Curious Theatre is located at 1080 Acoma St. in Denver.
Marlowe's Musings