Elisabeth Caballero, the outstanding Micaela in last season’s “Carmen,” ravishes us as Mimi. With her soaring soprano and considerable acting talent this artist creates an indelible and heartbreaking portrait. 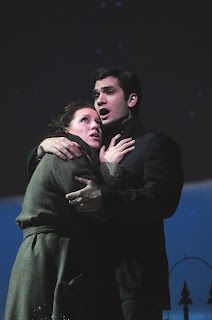 Eric Margiore’s Rodolfo is powerfully sung and acted. Margiore makes sure that each and all in attendance has his tear ducts aligned with his heart strings. From his singing of the aria describing Mimi’s cold little hands early in the opera to his final outcry of “Mimi!,” sounding the death knell of this young love, Margiore is nothing short of magnificent. 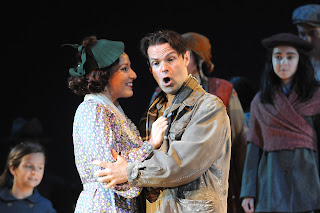 As Marcello, Troy Cook is a fine example of what the new opera artist must be. He sings rapturously and acts with style in both comic and dramatic moments. 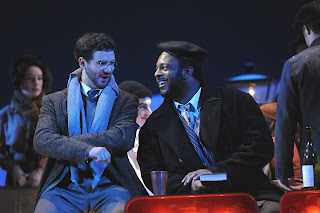 Ryan Speedo Green’s Colline is sung with a profound resonance that will be remembered long after one leaves the opera house. Outstanding! Mr. Green has sung the Comendatore in “Don Giovanni” at Julliard Opera and here reprises the role of Colline, which he played in the recent production of “La Boheme” at Opera Colorado.

The children of the Colorado Children’s Chorale sing with a celestial quality seldom found in such a young group. They move about the stage with the confidence and authority of truly professional artists.

Only one brief glitch momentarily broke the spell. The letters of the signage for Café Momus had to be moved a little bit to accommodate the blocking of the large assemblage of cast members at one point. It’s a small criticism for an otherwise perfectly enchanting evening of Grand Opera. 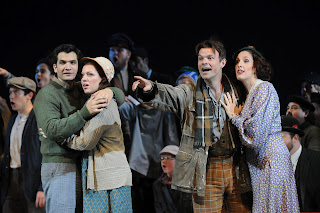 This is an auditory banquet that is unmissable!

Central City Opera is offering "La Boheme" in repertory with Benjamin Britten’s “The Turn of the Screw” and Rodgers and Hammerstein’s “Oklahoma.” It is to be noted that two fully orbed productions of this “Oklahoma” will be presented at The Newman Center on the University of Denver campus as well.