It seems that The Colorado Shakespeare Festival is not just good at producing the plays of the Bard. The other night this reviewer attended one of the funniest productions in memory, and it was written not in the late 1500s but in 1982.
It’s a play within a play that is set in the 1960s. Having been seen multiple times by this reviewer it still manages to shatter the funny bone. The material is magnificently written. The authors of all farces intend to make the audience laugh. However … few achieve this goal with such outrageous and unmitigated success.
Michael Frayn’s ability to create this fantasia of theatrical calamity is without equal. And yet, great farce though it may be, it still requires the clear-eyed casting of an astute and slightly tilted director. One has never met director Lynne Collins but imagines her to be someone who can laughingly throw back a tin of sardines or two just about anywhere. 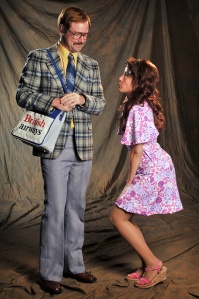 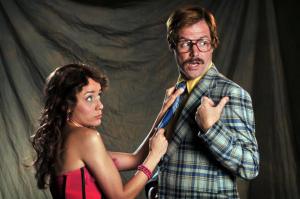 Pictured above are Jamie Ann Romero and Geoffrey Kent in various states of "Noises Off"
Photo credits are: Glen Asakawa/University of Colorado
Ms. Collins has that greatest gift the Divine has given to any director – the ability to cast impeccably. Most of the actors in this inspired bit of lunacy are of the variety that is spot on every beat of the production.
The great lights within this theatrical firmament are those of: Leslie O’Carroll, Jamie Ann Romero, Geoffrey Kent and Tim McCracken.
Ms. O’Carroll is the greater light that, rules the play. (Sorry!) If you open your program and find this fine actor’s name listed therein you can be assured of at least one superb performance!

Mr. McCracken is the harried director.
Mr. Kent is the klutzy and bullied leading-man. (What fun to see the maestro of all things fight choreography, seem to slip and trip and bite his lip and skin his hip. Anyone else would have been seriously mangled!)
Ms. Romero is the ingénue whose hilariously intentional OCD approach to the blocking changes not at all regardless of how the production evolves. This actor is utter perfection in anything she sets out to do onstage.
There are other stars within the firmament of this play including Kate Berry, Ian Anderson, Rachel Fowler, Jake Walker, R.J. Conley and Jim Hunt. Mr. Conley stood in for Mr. Walker on the evening this reviewer was in attendance.
Sometimes in past reviews I have suggested that readers run to get tickets. In this case one should perhaps walk steadily and with care holding on to any railings leading to the box office. What’s hilarious good fun onstage is often not nearly so much fun in reality.