This reviewer must confess to having gone to “The Addams Family” with rather low expectations. After all, a musical based upon a bizarre television series from the ‘60s did not sound all that promising. 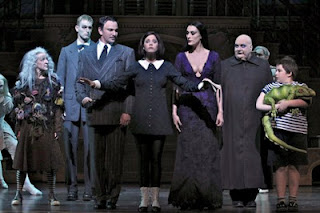 Left to right: Pippa Pearthree, Tom Corbeil,Douglas Sills,Cortney Wolfson,Sara Gettelfinger,Blake Hammond and             Patrick D. Kennedy
However … “The Addams Family” turned out to be a thoroughly entertaining evening of unabashed theatrical joy. Not so much cloying joie de vivre though. It’s more like a grinning joie de mourir. I’m laughing even as I write this remembering the many hilarious, if slightly morbid, tongue-in-cheek moments.
The cast is excellent to a man/woman/ghoul and the technical work superb.
The music and lyrics by Andrew Lippa are utterly delightful providing just the right macabre merriment for this musical.
The overture is one of the most listenable and engaging in recent memory. Lippa’s score is peppered with tango tempos that really keep the evening moving.

Songs that will make you want to buy the original Broadway soundtrack are: “When You’re an Addams,” “Death is Just Around the Corner,” “The Moon and Me” and “Move Toward the Darkness.”
Sara Gettelfinger’s interpretation of Morticia is a deadpan delight. 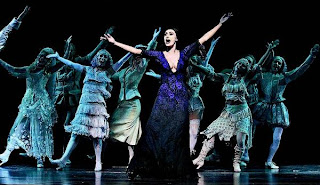 Tony nominee Douglas Sills is a superbly engaging Gomez.
It’s not a stretch to say that “Pulled” really racks one up for Wednesday (Cortney Wolfson) and Pugsley (Patrick D. Kennedy) in their great duet about sibling torture. 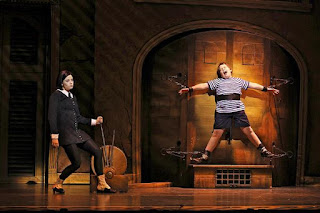 The show includes a show-stopping scene in which an airborne Uncle Fester (Blake Hammond) courts the lady in the moon.
When the requisite ‘normal’ parents of Wednesday’s new boyfriend come to dinner there is a great after dinner game called “Full Disclosure”-think George and Martha- which gives Gaelen Gilliland, the normal Mom, a chance to unleash the beast within. Awesome work!
It’s all macabre merriment that’s a freakin’ hoot n’ a half!
So as Gomez and Morticia sing... go “Live Before You Die” and see “The Addams Family.”
All of Denver is dying to get in.

Don’t even think of missing it!

Buell Theatre through July 1, Tuesday-Sunday at 7:30 p.m. and Saturday-Sunday at 2 p.m. For tickets, visit www.denvercenter.org or call 303-893-4100.david-marlowe.blogspot.com
Posted by David Marlowe Theatre Reviews at 7:11 PM