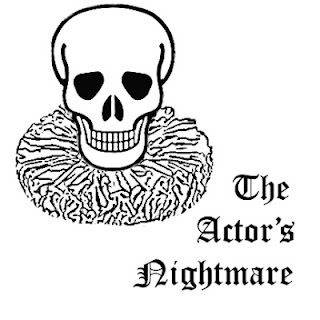 Christopher Durang’s “The Actor’s Nightmare” is the first in a series of classic one-act plays to be presented by Germinal Stage Denver on Monday, Tuesday and Wednesday evenings.

Steve Kramer, who also plays an executioner drawn from one’s memory of “A Man For All Seasons”, directs the show. Dear reader, I hope that you do not think that this reviewer like Kramer’s character has an axe to grind. Upon the night of first preview Kramer was the only actor to have found his character. The rest of the cast appeared to be six actors in search of a playwright. This is not Pirandello however. It’s Durang.

It’s nearly three decades since this reviewer saw the superb production of this play for which Kevin Hart received the Best Actor’s award from the Denver Drama Critics. It was done at The (old) Avenue Theatre on Seventeenth Avenue. That production was so funny and so frenetically paced as to have been lodged in this reviewer’s theatre hall of fame for all eternity.

This production? Not so much.

Zachary M. Andrews plays George Spelvin, a young accountant, mistaken for an actor, who awakened in his own lucid dream, cannot seem to remember his lines or even which play he’s in. Is it “Hamlet” or ”End Game?” Mr. Andrews has been seen to be a fine actor in numerous productions in the past few years. (He was brilliant as Marchbanks in Germinal’s version of Shaw’s “Candida” and equally brilliant as Simon Harford in GSD’s production of O’Neill’s “More Stately Mansions.” Here he is just coming off some fine work in “The Two of Us” at Miners Alley. However … thus far the actor has not developed any sense of the absurd with regard to frustration, fear or anger at his character’s inability to understand what’s going on and how to respond.

Unfortunately the only thing about this production that related to the dream state on the night this reviewer was in attendance was the inducement of a state of drowsiness.  Who was it that said, ”Laugh and the world laughs with you. Snore and you sleep alone?” But I digress.  Although this is not generally the case in theatre reviews perhaps the soporific aspect should be taken into account in this “Nightmare.”
This reviewer must confess to the fact that he usually runs to a first or second preview of shows at Germinal. For years the shows have been polished well by that time.  Perhaps one should wait a while longer. The only problem here is that with so many theatre productions opening now one runs the risk of missing a show  altogether.

These are superb actors and Kramer is a very fine director. One is sure that by the time that you are reading this, dear reader, there has been an evolution in the acting. There always is growth and development as a show continues. On the basis of this thought alone can one recommend seeing “The Actor’s Nightmare.”

PLAYING MONDAY, TUESDAY, AND WEDNESDAY EVENINGS AT 7:00
THROUGH JUNE 6th
ALL TICKETS $7.75