Master Class
Miners Alley: 2/24 – 4/1
“Master Class,” Terrence McNally’s play about Maria Callas will stun and astonish you!
Opera star Marcia Ragonetti delivers an outrageously well thought out cage rattler of a performance as Maria Callas in Miners Alley Playhouse’s outstanding production of Terrence McNally’s “Master Class.” As brilliant as her acting is jaws drop when this opera star sings. Playwright McNally has set the piece in a classroom at Julliard in 1971.For years Callas lived and worked at peak performance and then was unceremoniously dumped by the inevitable ravaging of time on her vocal chords and the callous nature of her husband, Aristotle Onassis. Ms. Ragonetti engages the audience in an intimate conversation, one sided though it is, which draws us in with her tongue in cheek banter and the off the cuff insults aimed at her pupils. This is a revenge play. When one has lived The Good Life full tilt onstage and off for a number of years and is summarily dumped by Life and Love simultaneously would one not tend to be bitter? Callas is enraged at her loss and takes it out on her students. Boni McIntyre co-stars in the show as the only one of this trio of students who is able to rise to Callas’s demands by equaling and momentarily overpowering her rage. This artist’s performance is riveting in the acting and her vocals. Kelly Twedt , the first victim, I mean student is subject to an excoriating humiliation by the embittered diva regarding her dress, her manner and her general ignorance of how one presents oneself upon the opera stage. Alex Sierra, another student, gives us the perfect specimen for Callas to denigrate due to his inability to know Cavardossi’s subject matter in his aria from “Tosca.” He can’t tell Callas the location and back-story even so far as his character’s sexual exploits of the previous night. Sierra was in fine voice on the night this reviewer was in attendance and one hopes he will continue his career as an opera singer. As the accompanist, Travis Yamamoto endears as he suffers some of the artist’s more callous digs regarding what’s in a name, one’s race and one’s religion. Director Kramer makes intermittent appearances as a stagehand, who must bow to Ms. Callas by bringing her a footstool and water as well as adjusting the lights and temperature in the studio. The lighting design by Jonathan Scott-McKean is of the professional quality theatre lovers have come to expect of him. There is passion and fury in this production that make it unmissable. It’s one of the most absorbing dramas in recent memory.
Not to be missed.
Tickets are $19.00 - $26.50
senior, student and group rates available.
Call 303-935-3044
Or go online at: www.minersalley.com 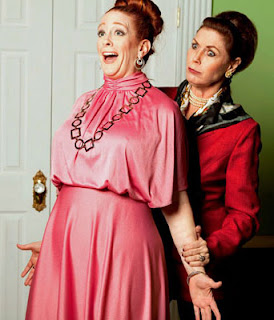 Posted by David Marlowe Theatre Reviews at 6:53 AM