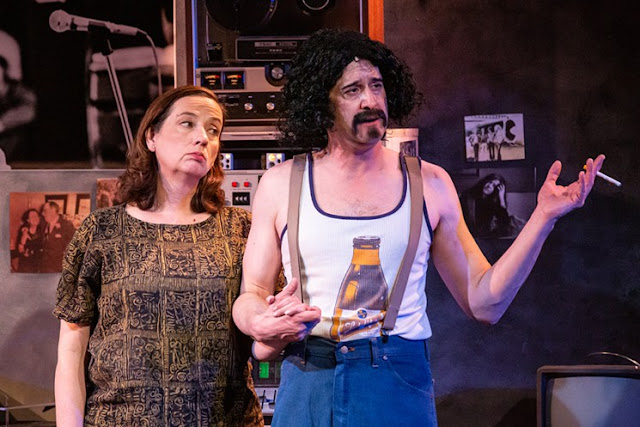 Playwright Josh Hartwell has done an admirable job with his intriguing new play, QUEEN OF CONSPIRACY.  More than just an homage to conspiracy theorist Mae Brussell, the play is an exhortation for us as individuals to pay attention to our politics and to take action when we begin to connect the dots. No matter which president or political official has been assassinated the government commissions never tell the people the truth. We never get a valid explanation of which individual or group of individuals committed the crime. So even if a conspiracy theorist makes a few errors, it’s heartening when one like Ms. Brussell strikes a bulls eye with something as important as Watergate.
Denver favorite Abby Apple Boes turns in a brilliant performance as Mae Brussell.
Bill Hahn delivers a sober intellectual and a hilariously quirky airhead professor with consummate skill.
With his curly black wig and rocker swag, Damon Guerrasio is a superb dead ringer for Frank Zappa.
Heather Lacy plays Olivia, a devotee of Ms. Brussel, whose daughter,Rachel, played by Chloe Mcleod, gradually emulates. Ms. Lacy stepped in at the last minute to take the place of an injured actor, who was prevented from appearing due to her injury. Ms. McLeod played Joan in Miners Alley's critically aclaimed production of "FUN HOME."
You will remember Sinjiin Jones, who portrays Carson, Chloe’s boy friend, for his fine performance in "DISTRICT MERCHANTS."
Jonathan Scott McKean did his usual magic with the scenic design. He is aided in no small part by Elizabeth Scott-McKean’s scenic dressing, which places us solidly in the 1970s.
Scott McKean also did the dynamic sound design, which accompanied by Vance McKenzie’s dramatic lighting design, conspire (sorry) to create explosive snapshots that rivet.
Director Len Matheo has cast the show impeccably.
Conspiracy theory is all over the internet, yet this is the first this reviewer has heard of Ms. Brussell. Always interested in this phenomenon, one wishes to know more about her.
This play will send you racing for your computer to learn more about Ms. Brussell. In the process you may run across Nancy Lieder, a contemporary conspiracy theorist who channels a race of aliens known as the Zeta Reticuli. Ms. Lieder discusses connections to everything from national elections to an upcoming planetary collision with an asteroid on zetatalk.net.

Truth or fiction? You decide.

QUEEN OF CONSPIRACY deserves your attendance. Don’t miss it.