A GENTLEMAN’S GUIDE TO
LOVE AND MURDER
VINTAGE THEATRE PRODUCTIONS: 2/1 – 3/24 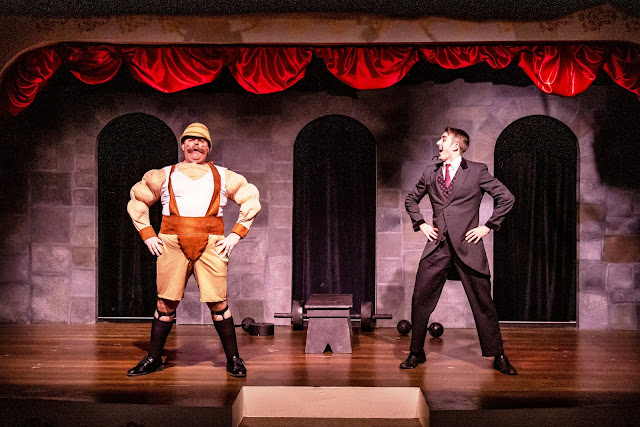 With music and lyrics by Steven Lutvak, and book and lyrics by Robert Freedman, Vintage Theatre’s production of A GENTLEMAN’S GUIDE TO LOVE AND MURDER is a Denver premiere to die for.
This show got four Tony Awards in 2014, including Best Musical.
Based upon the novel, “Israel Rank: The Autobiography of a Criminal,” it was later adapted into a British film called “Kind Hearts and Coronets.”  It’s the tale of a young man’s rise from rags to riches in a murderously funny fashion.
The deft direction by Bernie Cardell in combination with Music Direction by Lee Ann Scherlong assures the theatre patron of a rollicking evening of visual and auditory delight.
Cardell has taken clear aim at the theatre patron’s funny bone with his stage direction, and strikes the bull’s eye more often than not.
Ms. Scherlong sees to it that not only solos and duets shine. Her music direction gives us choral work that’s exceptional and a backstage orchestra that’s superb.
The combination of Cardell’s stage direction and Scherlong’s music direction proved to be musical theatre Magic on the snowiest day of the year!
In a masterful coup de theatre Brandon Bill takes on the daunting challenge of playing a number of the members of the D’Ysquith family of various age and gender with style, panache and over the top comic skill.
Director Cardell here introduces us to several new faces in his cast.
Andy Seracuse plays the central character, Monty Navarro. Mr. Seracuse is an excellent musical theatre actor. His sterling vocals, hilarious facial expressions and charming stage presence make us hope to see him again soon upon the Colorado stage.
Anna Jennes plays Sibella Holland. As she giggles her way into your heart you will notice that this beautiful young woman has a voice that’s a ribbon of pure gold.
Kate Jackson is the third in this constellation of new stars. In the role of Phoebe D’Ysquith the fetching Ms. Jackson proves to have a gorgeous voice and wonderful stage presence.
The   exuberant ensemble includes the likes of Kerri Emswiller, Todd Black (Both past Marlowe Award winners) and the always watchable Michelle Jeffres. Kristine Kahane is hilarious as Miss Shingle.
Set designer Ryan Walkoviak has transformed the stage in the Jeffrey Nickelson Auditorium into three stages, each one adorned with an eye-catching cherry red waterfall curtain, made luminous by Kevin Taylor’s excellent lighting design.
Susan Rahmsdorff-Terry’s costume design is scrumptious.
Stephanie Hesse has done some wondrous choreography which makes the tongue-in- cheek nature of the show’s propensity to poke fun at British propriety and manners, really pop! GO!GO!GO!GO!Marlowe's Musings

Posted by David Marlowe Theatre Reviews at 11:22 AM