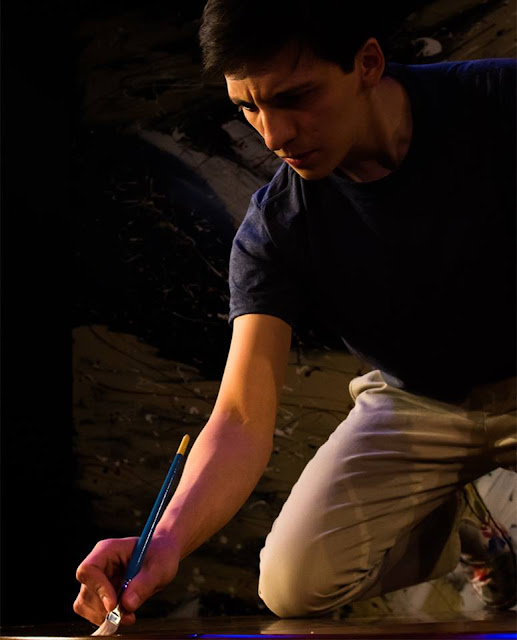 Based upon the novel penned by Chaim Potok, Aaron Posner’s stage adaptation of MY NAME IS ASHER LEV, is a profoundly spiritual journey about a young man’s struggle to express his artistic talent as it collides with his Hasidic Jewish family and their religious beliefs about Art.
Perhaps due to a case of opening night jitters, MY NAME IS ASHER LEV was a little slow building steam on Thursday evening. Shortly thereafter the show caught fire, and the rest is history.
Josue Ivan Prieto portrays the creator of such masterpieces as “Brooklyn Crucifixion 1” and “Brooklyn Crucifixion 2,” from innocent child to master artist, with true chutzpah.
Josh Levy portrays all the men: Aryeh Lev Yitzchok Lev, The Rebbe and Jacob Kahn. Levy, who recently played Charley in The Edge Theater’s critically acclaimed DEATH OF A SALESMAN, is especially memorable as Jacob Kahn, the outspoken mentor of the burgeoning artist.
Christy Kruzick plays all the women in the piece: Rivkeh Lev, Anna Schaeffer and Rachel. Kruzick shines in her nuanced portrayal of Anna Schaeffer, an outspoken Art connoisseur.
Bernie Cardell’s direction is of the professional quality Denver audiences have come to expect from him.
M. Curtis Grittner’s eye-popping scenic design covers the back wall and the floor of the playing space with a fantasia of splatters and brush strokes in a chroma key of primary colors that appears to have splashed right out of a can.
Morgan McCauley (MARLOWE AWARD for SOUND DESIGN for TARTUFFE at ARVADA CENTER) stitches the scenes together with a stirring and sensitive sound design.
Karalyn Star Pytel creates her usual mood-shifting magic with the lighting design.
Go and support Cherry Creek Theater and the Mizel Arts and Culture Center.Marlowe's Musings

Posted by David Marlowe Theatre Reviews at 6:41 AM