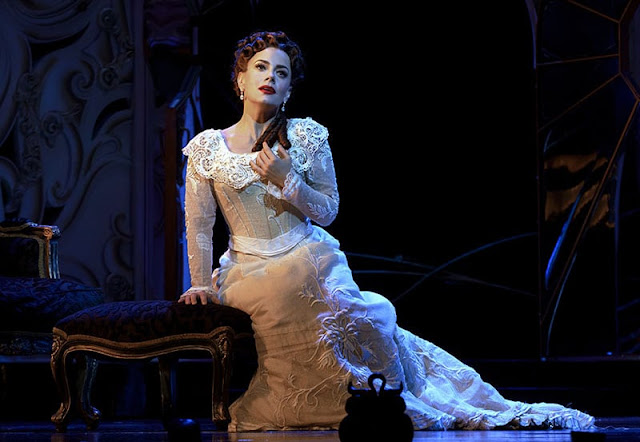 Vocally outstanding and visually magnificent, the production now on view at The Buell Theatre is sheer musical theatre magic!

“LOVE NEVER DIES,” the long-awaited sequel to Andrew Lloyd Webber’s beloved “PHANTOM OF THE OPERA,” is a feast for both the ear and the eye.  From the principals to the supporting cast, the acting, singing and dancing, dazzles.
Megan Picerno’s vocals as Christine Daae are delicious. The dulcet tones of her singing of the title song, “LOVE NEVER DIES,” met with such an appreciative roar from the audience, one fully expected a
mid-show standing ovation immediately thereafter.
“Devil Take the Hindmost,” the duet sung by Raoul (Sean Thompson) and the Phantom (Bronson Norris Murphy) at the top of Act Two, is unforgettable.
As directed by Simon Phillips, the staging of the show is mysteriously magical and often deliciously dizzying.
The live orchestra, conducted by music director Dale Rieling, explodes with Lloyd Webber's gorgeous, melodic score!
There is a crackling good lighting design by Nick Schlieper, as well as eye-popping scenic and costume designs, both by Gabriela Tylesova.
Whether engaging us with the cirque aspects of the show, as in “The Coney Island Waltz,” or bringing the music hall to life, as in Meg’s (Mary Michael Patterson) lively performance of “Bathing Beauty,” The choreography (Graeme Murphy AO) for the show dazzles.

In case you missed something, I LOVED IT!!!Marlowe's Musings

“LOVE NEVER DIES” has music by Andrew Lloyd Webber, lyrics by Glenn Slater and a book by Ben Elton that’s based upon “The Phantom of Manhattan” by Frederick Forsyth.
For tickets call 303-893-4100 or go online at denvercenter.org
Posted by David Marlowe Theatre Reviews at 7:13 AM