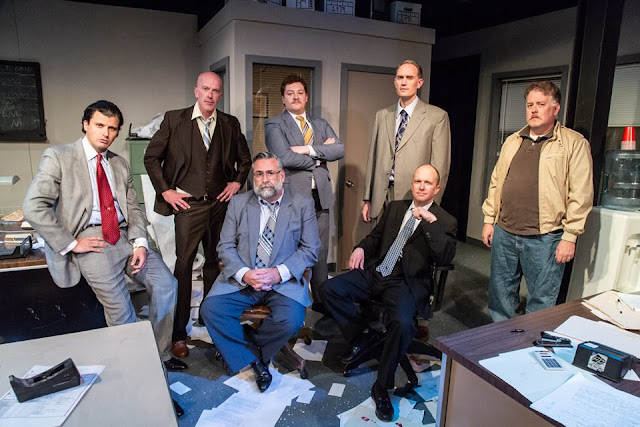 The cast of Glengarry Glen Ross

One expects excellence when he sees the cast list for The Edge Theater’s current production of David Mamet’s “GLENGARRY GLEN ROSS.”
Although each actor has his moment, the show never really gels.
Unfortunately, this amazing cast fails to bare its teeth and spill its guts in the deliciously vicious style of the ensemble in The Edge’s previous near-perfect production of this work ten years ago.
As always, the interruptions, pauses and explosive expletives of Mamet’s language give us a realistic version of the rapacious repartee of office politics. Nevertheless …the jagged counterpoint of Mamet’s dialogue gets a smoother read here than it does in most productions, becoming more layered than one might expect.
Go for Bill Hahn’s raging portrayal of Williamson and Warren Sherrill as Shelly Levine.
One would be remiss in not saying that both Brandon Case's scenic design and Carlos Flores' sound design excel. (Mr. Flores' riveting video trailer for the show made me get up and call for a ticket.)
See it if you must.