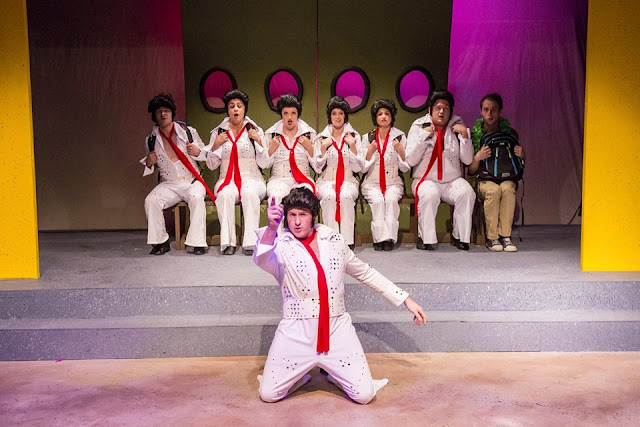 Honeymoon in Vegas is one of the funniest, most entertaining productions of a musical comedy this season.
With music and lyrics by Jason Robert Brown and book by Andrew Bergman, it’s based upon the 1992 film of the same title.
Director Bernie Cardell has cast the show with a number of Denver favorites and paced it at a gallop.
Carter Edward Smith (Marlowe Award winner for Best Actor in Miners Alley Playhouse’s “Little Shop of Horrors,”) leads the cast as Jack Singer, the young lover who loses big time in a Vegas poker game.
As a consequence he is strong-armed into giving the big winner a weekend with his fiancé.
Carmen Vreeman Shedd, who portrays Jack’s fiancée, Betsy Nolan, is a delightful new talent who’s both easy on the eyes and ears. One hopes to see her again soon upon the Denver stage.
Brian Walker Smith plays Tommy Korman, the guy who beats Jack at poker. This is far and away the best of all this actor’s numerous musical theatre performances.
Michael O’Shea is hilarious as Tommy’s gangsta toady, Johnny Sandwich.
Suzanne Connors Nepi puts the fun meter on overdrive as the memory of Bea Singer, Jack’s dead – and disappointed - mother.
John White (Best Actor in a Musical for his performance as Albin in Ignite Theater’s production of “La Cage Aux Folles”) spices up the ensemble exponentially.
The choreography by Jeffrey Parizotto and Stefanie Raccuglia is rambunctious good fun!
Susan Rahmsdorff-Terry (Marlowe Award for Best Costume Design for Spotlight Theatre’s “The Big Bang”) does another bang-up job with the costumes for this show.
Eric Weinstein created the ear-pleasing music tracks that keep this musical bonbon bouncing throughout.Marlowe's Musings

Posted by David Marlowe Theatre Reviews at 6:55 AM