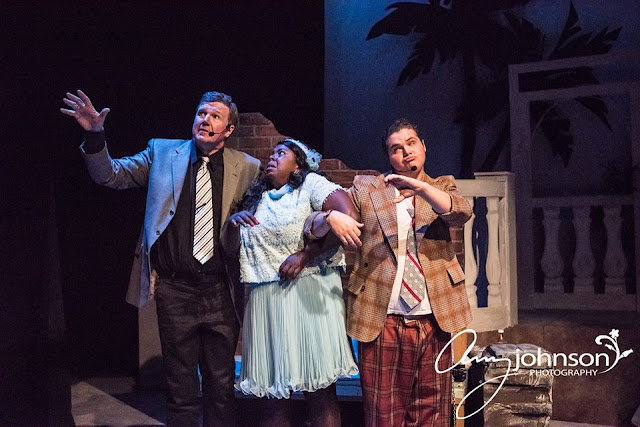 
“Dirty Rotten Scoundrels, the Musical” is based upon the movie of the same name, that starred Steve Martin and Michael Caine. When the show got translated to Broadway, with music and lyrics by David Yazbek and book by Jeffrey Lane, it landed eleven Tony nominations.
This reviewer was late getting over to Stage Door Theatre in Conifer to see the show and hopes that you were able to get there as well.
With the signature humor of PAMELA CLIFTON’s deft direction, it’s no surprise that this show was a hoot!
ADRIANNE HAMPTON created sparkling choreography that brought out all the entertaining moods of the piece.
BLAKE NAWA’A’s music direction was superb.
PARRISH WORSFOLD gave a memorable performance in the role of Lawrence, the older of these two con men.
In the role of the younger of the two, ANDREW STANLEY gave us an amiable Freddy.
EDDIE SCHUMACHER turned in his best work to date as Andre.
SONSHARAE TULL was hilarious as Jolene, the indomitable cowgirl from Oklahoma.
DEBBIE MINTER’s  Muriel was utterly delightful and Mariel Goffredi’s Christine, delicious.
Whether you were lucky enough to get to see this hilarious musical comedy or not, it behooves you to take a trip up to Conifer and Stage Door Theatre soon!

Go online at stagedoortheatre.org to check out what’s coming up next!Marlowe's Musings


Posted by David Marlowe Theatre Reviews at 10:19 AM