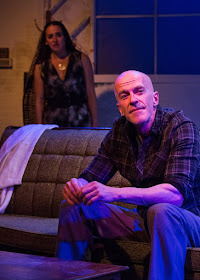 L-R: Karen Slack and William Hahn
Written by Lanford Wilson, “Burn This” appeared off Broadway in 1986.  It featured Joan Allen and John Malkovich.
Ms. Allen received the Tony for her performance as Anna.
After their roommate Robbie and his lover die in a boating accident, Anna and Larry, her other gay roommate, attempt to comfort each other.
When Pale, Robbie’s coke-snorting brother explodes onto the stage, things become more than a little bit chaotic, causing Anna’s longtime lover Burton to reassess their relationship.
Director Warren Sherrill, who also created the scenic design describing Anna’s seedy Bohemian apartment, has cast the show impeccably.
Bill Hahn is one of the most watchable actors in town. He can take us from laughter to tears on a dime.
Anyone who saw this artist’s Henry Award-winning performance in Curious Theatre Company’s “Frozen” knows exactly how intense and riveting he can be.
Ms. Slack proves once again that she is one of our most accomplished dramatic actors. Her artistry in the one-woman show, “The Syringa Tree,” Curious Theatre’s “God of Carnage” (Marlowe Award) and her portrayal of Frida Kahlo in Melissa McCarl’s “Painted Bread” are just a few of her many stunning performances.
Genuinely funny in some scenes, Drew Horwitz portrays Anna’s gay roommate, Larry with caring compassion.
John Jankow performs the part of Anna’s lover, Burton with a one note, self-absorbed narcissism, of which the playwright would thoroughly approve.
Lanford Wilson has created some fascinating characters, but don’t expect any tidy conclusion.