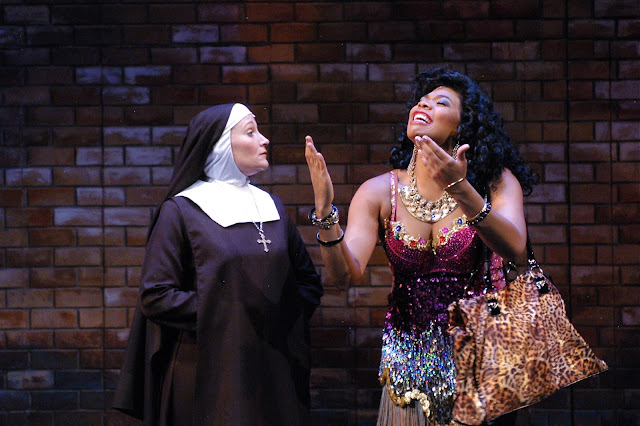 Arvada Center’s production of “Sister Act” is the most entertaining evening of theatre onstage this Fall.
Thanks to Rod A. Lansberry’s expertise in directing the American musical comedy the Denver audience can once again experience top drawer Broadway Quality theatre at Arvada Center.
Based upon the 1992 Touchstone movie, this show has music by Alan Menken, lyrics by Glen Slater and book by Bill and Cheri Steinkellner.

It’s the 1970s in Philadelphia and nightclub singer Deloris Van Cartier witnesses a murder committed by her boss. While the police are tracking him down, she hides out in a convent. While there, Deloris transforms the abysmal choir into one of rock star quality.

Brit West does an exceptional job portraying Deloris Van Cartier, the character portrayed by Whoopee Goldberg in the movie.
Megan Van De Hey is luminous as Mother Superior. This artist sings so heavenly you’ll be transported back to the celestial memory of her Henry Award performance as Mother in “Ragtime.” And for those few who were unable to get a ticket for Arvada Center’s “Ragtime,” her singing of "Here Within These Walls” and “I Haven’t Got a Prayer” will be the new standard for such auditory pleasure.
In supporting roles you can thank the Lord for Emma Martin(Sister Mary Robert), Stephen Day(Monsignor O’Hara), Sharon Kay White(Sister Mary Patrick), Kitty Skillman Hilsabeck(Sister Mary Lazarus) and Keith L. Hatten (Curtis Jackson). New to this reviewer were the show-stopping talents of David Kaverman (Sweaty Eddie) and a trio of hilarious gangstas played by Napoleon M. Douglas, Anthony Alfaro and Aaron Fried.
I kid you not when I say that even the ensemble runneth over with superb local talent: Piper Lindsay Arpan, Rob Costigan, Reace Daniel, Maggie Davenport, Brian Jackson, Heather Lacy, Norrell Moore, Sarah Rex, Mark Rubald, Maggie Tisdale and Krisangela Washington.
Miraculous is the word to describe the Music Direction(David Nehls), Lighting Design(Shannon McKinney) and Costume Design(Brianna Diaz) of this show.
The real star of this show however, is choreographer Kitty Skillman Hilsabeck! This artist’s choreography is exhilarating, breathtaking and often hilarious! Her work as choreographer enhances this production so much that it’s impossible to look away.
Marlowe's Musings