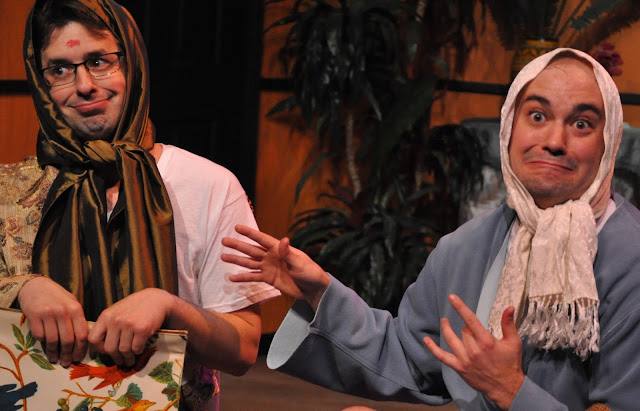 “The Big Bang” is a deliriously funny musical about the History of the World that's a blast from the past – all of it!
It’s the tale of two young theatre writer/composers who have a new musical and no money.
We as audience are the prospective investors who have come to the writers’ friend’s home where these two guys are going to put on the play in the hopes of monetary contributions at final curtain.

It’s the history of the world from the Garden of Eden to the present.

Oh My God! Joe Von Bokern and Ben Hilzer are gods of the comic romp! They are aided in no small part by Blake Nawa’a, whose musical direction and accompaniment on the piano allow the songs to really pop!

Thanks to director Katie Mangett’s superb casting as well as her having paced the show as if it were a theatrical stampede, you can be assured that you will be busting a gut laughing from curtain to curtain.

And speaking of curtains, which both men wear as if they were about to be arrested by the fashion police, the creative costuming by Susan Rahmsdorff is utterly delicious. This artist’s costume design allows for everything in the room from clocks to fruit bowls to become hilariously appropriate historical and hysterical accoutrements.
Christian Munck’s choreography adds immeasurably to the silliness as well.
Having seen two previous productions of this script, which were 'watch watchers,' I was hesitant to go at first. However ... I have never been so happy to have listened to the still small voice - yes all theatre critics listen to the voices - that said "put your butt in a theatre seat and give this show one more chance."

It's the perfect antidote for the insanity currently being aired as the evening news.