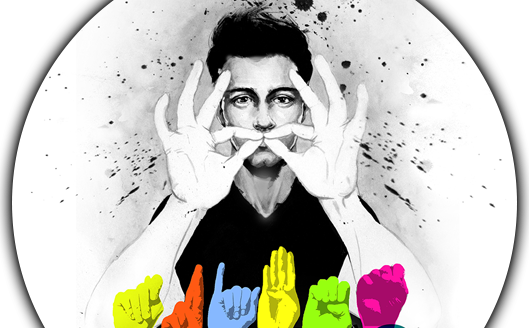 Nina Raine’s “TRIBES” is a powerful play, and The Denver Center Theatre Company’s production thereof is one of the best of the season.
Playwright Raine has peppered the dining room set-up for this play with a machine gun spray of hilarious if often abusive epithets and bon mots. Everyone shoots off his/her mouth without ever listening to what anyone else has to say.
In Raine’s play a dysfunctional family has raised a deaf son as if he were able to hear. No one listens to anyone in this tribe. There is a brother who has emotional problems of his own and a sister who’s lying to herself about her virtuosity as a singer. Tad Cooley plays Billy, the son who was born deaf, with strong stage presence. Andrew Pastides portrays Billy’s brother, Daniel with a wide range of emotion. Isabel Ellison is their sister, Ruth.
When Billy meets Sylvia (Kate Finch), a young woman who is going deaf, at an event sponsored by the deaf community he begins to find his “tribe” by coming in contact with people who are just like him.
Kathleen McCall is brilliant as Beth, a harried mother and wife who does all she can to fend off the barbs of her chauvinist husband while dealing, however poorly, with the sibling rivalry of her offspring. McCall is at her hilarious best trying to find a ringing cell phone under the billowing kimono her husband has required her to wear prior to meeting Billy’s new girl friend.
Stephen Paul Johnson plays Christopher, the abrasive and LOUD patriarch of the clan.
Director Stephen Weitz’ casting is impeccable and his pacing the kind that keeps an audience constantly engaged.
Shannon McKinney’s lighting design illuminates the proceedings with her usual professional brilliance. Craig Breitenbach’s sound design enhances the directorial concept exponentially. The Projection Design by Charlie I. Miller provides surtitles, which clarify the sign language used in certain scenes.
“TRIBES” comes with high recommendations from this critic’s desk.