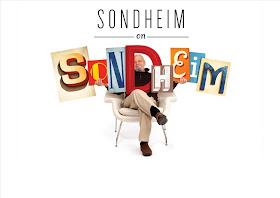 Pat Payne has done an admirable job directing the regional premiere of Cherry Creek Theatre’s “Sondheim on Sondheim.” It’s  a revue that touches on 21 shows including 64 parts of various songs. Many of the selections are well known and some of them a bit more esoteric.
Stephen Day commands the stage with his outstanding rendition of “Being Alive” from “Company.”
Susie Roelofsz touches us with her singing  of “Send in the Clowns.”
Boni McIntyre’s “Do I Hear a Waltz” is great … even with the onscreen Sondheim interrupting her to say that this was not his favorite musical.
Brian Merz-Hutchinson’s superb musical theatre talents are showcased in his singing of “Finishing the Hat” from “Sunday in the Park with George.”
Jennifer De Dominici sings “Simple” from “Anyone Can Whistle” with a soprano to die for.
It’s a show for people who know and adore Sondheim and who want to become acquainted with him on a more intimate level.
The list of songs include some from “Sweeney Todd,” “A Funny Thing Happened on the Way to the Forum,” “Passion” and “Into the Woods.” There’s even a song that was cut from “Gypsy”called “Smile,Girls.”
Merz-Hutchinson’s and Roelofsz’ singing of such songs as “Loving you is Not a Choice” makes one long for a great production of “Passion.”
In the video segments Sondheim speaks directly to us as audience about his close relationship with Oscar Hammerstein, his problematic relationship with his mother and also about his creative process. There are anecdotes about such actors as Ethel Merman as well as memories of his working on the lyrics for “West Side Story.”Marlowe's Musings