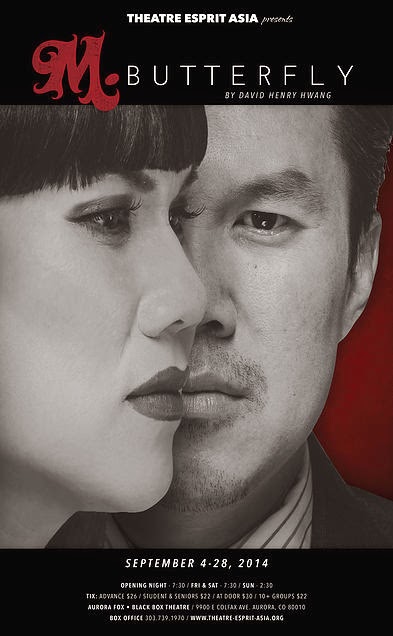 Playwright David Henry Hwang’s “M. Butterfly” received two Tony Awards while on Broadway in the final years of the 1980s. Based upon a news article about a Frenchman who falls for a diva that’s a star of the Chinese opera, the show addresses questions of racial stereotyping, sexual identity and whether one person can ever truly know another.
Kevin Hart’s acting of the part of French diplomat Rene Gallimard is outstanding. Hart commands the stage as few actors can.
Martha Harmon Pardee and Erica Fox provide us with a vision of strong Western women that contrasts dramatically with that of the stereotypical subordinate Eastern woman.
Stuart Sanks and Verl Hite deliver the goods in numerous supporting roles.
Arlene Rapal turns in fine work as Suzuki and Comrade Shin.
The complexity of the role of opera star Song Liling calls for an exquisite delicacy. Anyone having seen the ‘poetry in motion’ of the actress who portrayed Moon in Central City Opera’s production of Guo Wen Ging’s opera “Poet Li Bai” will understand what I mean. The stylization required for this type of work takes years to perfect. One wishes for more attention to detail from director Rick Shiomi and actor Charlee Chiv in eliciting this illusion.
Christopher Waller’s blood red set deserves mention for its very fine design.