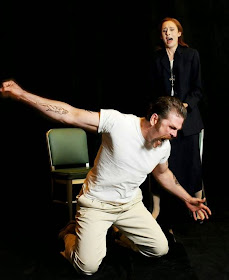 Central City Opera’s “Dead Man Walking” is the most profoundly spiritual production to have graced any Colorado stage in memory.
Michael Mayes who portrays Joseph de Rocher is a force of nature who was born to play this role. By turns Mayes imbues the role with disgust, self-loathing, animal fear and finally … love.
Jennifer Rivera plays Sister Helen Prejean.  The coquettish Rosina in last season’s excellent production of  “The Barber of Seville,” Rivera inhabits the character of this compassionate and courageous nun with a humble and unassuming dignity. Her emotionally charged soprano soars.
Maria Zifchak plays de Rocher’s mother with an astounding mezzo that will crack your heart open. (Ms. Zifchak will play the Mother Abbess in CCO’s “The Sound of Music” later in the season.)
Jeanine de Bique (Sister Rose) has a voice that is as smooth as a piece of lustrous silk.
Although Heggie’s musical influences have been listed as Britten, Debussy and Copland this reviewer was also aware of the influence of Gershwin and Bernstein. This score is the kind that flies through your nervous system straight to the heart.
Terrence McNally who wrote the Tony-award winning books for the musicals “Ragtime,” “The Full Monty” and “Kiss of the Spider Woman”, pens the libretto’s compelling lyrics.
On opening night conductor John Baril wielded a masterful baton that drove the work forward and forged a fiery unity between the orchestra in the pit and the singers onstage.
Ken Cazan’s stage direction is stunning for the most part. However… Cazan’s choice to present the crime in half-light and silhouette while lauded by some, may feel just a little bit restrained to others.
David Martin Jacques’ lighting design is transcendent.
There are moments in theater and opera that have a reverential feel of communion while sitting in the audience. At the completion of the opera the stillness of the audience was palpable. How much better would it be to let that awe surround than shake us immediately into the thunder of a curtain call. Though richly deserved our applause takes us out of the spell too quickly.

For tickets call 303-292-6700 or go online at CentralCityOpera.org.Marlowe's Musings