The Travesty of Lear
The Betsy Stage: through January 25 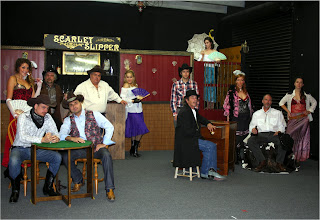 The cast of "The Travesty of Lear"

Ribald and raucous, “The Travesty of Lear” is an evening of silly fun that amuses.
The speeches of Michael Vasicek’s gravel-throated Lear reverberate throughout the space with a crisp clarity. His grizzled old saloonkeeper is one of the best things about the show.
One must advise you, dear reader, that more often than not Shakespeare’s plot gets lost in its journey to Last Chance Gulch. Playwrights Samantha McDermott, Jerian Franco and Kimberly Franco have had a great deal of fun transmogrifying the tragedy of Lear into a comic “Travesty.”  What they do best is recreating the play using stereotypical characters from the western movie genre. Lear’s daughters have been translated into prostitutes in Lear’s post gold rush saloon, The Silver Slipper. Everyone else is a cowboy.
The language is a mash-up of Elizabethan poetry and cowboy colloquialisms in which the cowboys come out winners every time. The direction provides moments of Monty Pythonesque hilarity such as the one in which various flora, fauna and miscellaneous stuff from the prop room fly over the saloon in the storm scene.  There’s also some nice thunder and lightning from the techies and some fun simulated slow mo action scenes done in the vein of silent western flickers.
Unfortunately we have to wait until final curtain for a rollicking musical number that makes one wish there had been others of its ilk to move the story along. The show’s production values, which are a bit on the ragged side, are shored up with grins and giggles generated by the exaggerated contrast of having the Bard’s characters perform slapstick antics like country bumpkins and speak the queen’s English with a rustic twang.The show is free to the public in the hopes that one will leave a donation at the door. The price is right, the cast enthusiastic and one wishes this fledgling company great good luck as we look forward to seeing “BETH,” its send-up of the Scottish play.