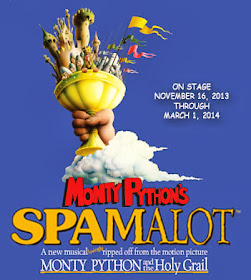 Boulder’s Dinner Theatre: 11/16 – 3/1
BOULDER’S DINNER THEATRE’S ”SPAMALOT” IS AN EXTRAVAGANZA OF SILLINESS THAT WILL PLEASE NOT ONLY FANS OF THE MONTY PYTHON COMICS BUT JUST ABOUT ANYONE WHO LOVES TO LAUGH!
The 1975 movie “Monty Python and the Holy Grail” has been a cult favorite ever since it opened and its fans adore the musical it spawnedalot! In 2005 The Pythonesque musical won the Tony Award for Best Musical on Broadway.
Goofy, silly, wacky and irreverent, “Spamalot” is a whimsical fantasia of the omnipotent variety. I can hardly wait to get back to see it again. This time the whole fam damily is going! 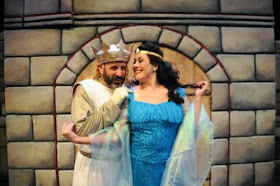 Alicia Dunfee is magnificent as the Lady of the Lake. Ms. Dunfee is decked out in some of the most gorgeous costumes to have been seen this season. The gowns costume designer Linda Morken has created for Ms. Dunfee’s aquatic goddess  shimmer and sparkle throughout. Dunfee’s vocals are, as usual, outstanding.
Wayne Kennedy is an Arthur who is disturbed, doubting and indubitably destined to discover the whereabouts of the Grail. Bob Hoppe is a superb Sir Robin. Brian Jackson has never been better as Sir Launcelot , a Knight of Ni and an epithet-spewing Frenchman on the battlements. The winsome, bodacious Brian Norber is a hoot as Dennis’s mother.  Brett Ambler, Blake Walton and Scott Severtson deliver the goods with just the right over the top over acting. And who would have thunk that the voice of Jerry Lewis is the actual Voice of God? Scott Beyette is delightfully subservient in the role of Patsy, Arthur’s longsuffering servant. And last but not least,the Lady of the Lake’s “Laker Girls” are given just the right cheerleading  pulchritude and chutzpah by Tracy Warren, Jessica Hindsley, Norelle Moore and Tracy Zimmerman. 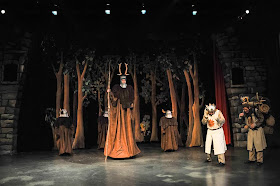 Left to right: Brian Jackson, Wayne Kennedy, Scott Beyette and some short Knights of Ni
Ms. Arpan directs with the sure hand of one who has known numerous actors in all of the roles in this show. This lady performed in this show on Broadway and was part of the national tour. Arpan really knows what works and what doesn’t as far as staging Monty Python’s funny “business.” Her direction emphasizes all the allusions to past musicals inherent in the show. The Fiddler on the Roof (“You Won’t Succeed on Broadway”…if you don’t have any Jews) and Lloyd Webber’s “Phantom of the Opera” (“The Song that goes Like This”) are just two of these. There are also jabs at “Wizard of Oz,” “West Side Story” and numerous other musicals.
Amy Campion has done wonders with the set and Todd Debreceni’s Armor Fabrication and Design is astounding. The fun quotient of this show is exponential and the laugh meter is nearly always on hyperdrive!
Oh, and if you order the Prime Rib your waiter will shout “Fetchez la vache!”
For tickets call 303-449-6000 or go online at bouldersdinnertheatre.com
Boulder’s Dinner Theatre is located at 5501 Arapahoe Avenue , Boulder, Colorado