Visceral and haunting, The Edge Theatre’s regional premiere of Rajiv Joseph's “Bengal Tiger at the Baghdad Zoo is an admirable production that one hopes you will get to see.
Two American soldiers in Iraq come face to face with their personal demons in this tale of war-torn Iraq.The universal question of the silence of God in times of despair takes a front row seat in this study of human beings aching to remain human in the midst of war. Man’s inhumanity to man and the inscrutability of the mystery of life is chewed up and spit out by a caged Bengal Tiger ruminating over his captivity and regrets. 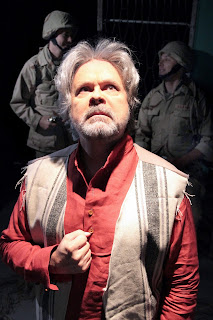 Paul Page portrays this pacing feline with indelible ferocity. This artist ages his appearance and voice to give his audience a truly nuanced performance. This is Mr. Page’s most formidable work since his studied portrayal of Shelly Levene in The Edge Theatre's production of “Glengarry Glen Ross.”
Sam Gilstrap plays Musa, an Iraqi man who is perhaps the most human being in the play. Mr. Gilstrap’s artistry makes us feel the tension of a person forced to connive in order to survive in his occupied homeland.
Kevin Lowry turns in a passionate performance as Kev.
Alberto Ocampo is outstanding in the role of Uday.
It is heartening to see that Nathan Bock has returned to the Denver stage after his memorable performances as Richard in the Denver Victorian Playhouse’s “Lion in Winter” and Miners Alley Playhouse’s “Hay Fever.”
The show is a bit more minimal than this reviewer would have liked. One wishes for more than a suggestion of the topiary garden in the lighting design.Marlowe's Musings