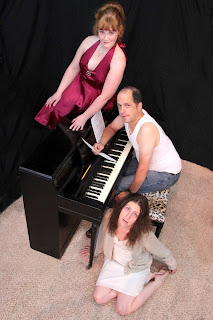 Playwright John Guare set his play “The House of Blue Leaves” in 1965 in Queens on the day that Pope Paul VI came to visit New York City. It’s a richly layered black comedy whose main character is a zookeeper who dreams of success as a Hollywood song writer. His wife Bananas is a schizophrenic who, over medicated to the point that she can feel nothing, is destined for a mental institution.
Guare’s play is a sometimes funny/sometimes tragic kaleidoscopic vision of a number of diverse realities colliding on that day in 1965.
Tom Auclair as the wannabe song writer turns in a thoroughly enjoyable performance. Auclair is a very fine actor who is finally being seen in a part that showcases his artistic talent. Bravo!
Missy Moore is outstanding as the schizophrenic wife who is struggling to regain her former self and her former feeling nature. Her intentionally pathetic appearance includes dull stringy hair and a body language that reflects bi-polar to the max. Missy Moore’s performance is bar none the most exquisitely heartfelt performance of the new season. For this reason alone you should run to get tickets.
Kelly Uhlenhoop is outrageously hilarious as Bunny, the romantic interest outside the marriage providing all the wifely duties except one...cooking! Ms. Uhlenhop proves that she really knows how to make an entrance…and then hold the intentionally over the top comedic energy of this character solidly throughout the show.
Zack Page turns in a passionate monologue with brio and assuredness.
Samara Bridwell provides infectious fun in her portrayal of a hearing impaired actor who finds it difficult navigating the waters of this odd collection of characters.
Director Scott Bellot has not only cast the show impeccably, his pacing allows for the humor inherent in Mr. Guare’s script to blossom, flower and explode right on schedule. In director Bellot’s capable hands the integration of these characters and their individual dreams unifies into such an incredibly nonlinear whole that it becomes a very strong hologram descriptive of this single specific day in New York.
The Edge Theatre
"The House of Blue Leaves"
July 19 - Aug 4
Thurs. (beginning July 25); Fri./Sat. @ 8 p.m.; Sun. @ 6 p.m.
Tickets: $22 adult / $18 student & seniors
*303-232-0363 or online at www.theedgetheater.com.
*The Edge Theatre, 1560 Teller Street, Suite 200, Lakewood CO 80214. Free Parking.Marlowe's Musings
David Marlowe Theatre Reviews at 4:48 PM
Share