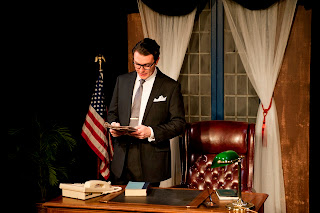 James O'Hagan-Murphy
Dear reader, please be aware that the following review is going to be one superlative after another. If I rave – and I will! – know that this is one of the most outstanding productions onstage in recent memory.

James O’Hagan-Murphy is electrifying as Robert Kennedy! The son of a mother and father who are both Irish Catholics, this actor merges our memories of Robert Kennedy with his own remarkably similar physiology and temperament. His portrayal of this great man is indelibly powerful and richly human.

Director Terry Dodd’s choice to cast O’Hagan-Murphy in this one-man show is impeccable. Since his forte is Americana, Dodd is really in his element and brings a deft directorial touch to the proceedings.

This is a production that needs to be seen by everyone.   Superbly crafted, this evening of theatre is inspired and inspiring!

The play is full of tidbits that fill in the back story of the Kennedy dynasty's tumultuous reign in this country with moments only a well researched play can provide. 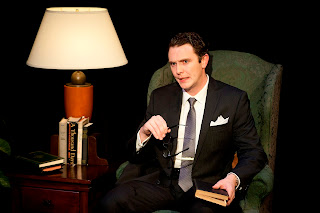 It's lucky for the patrons who get to be swept back into the  events of the 1960s in our country.

For those of us who remember where we were when the tragic events of the 60s took place this play is richly moving.

For those students of American History and Political Science  who are being introduced to RFK and such names as Hoffa, McCarthy and J. Edgar Hoover, the show will fascinate. 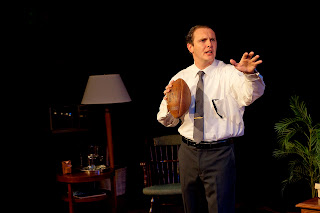 Riveting, absorbing and memorable, Vintage Theatre starts our year out with a luminous piece.  Marlowe's Musings