“Come and meet those dancing feet!” 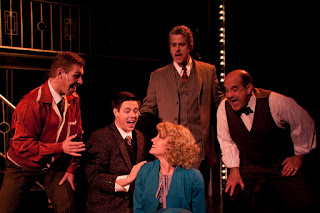 If you like a knock-out musical about life in the theatre half as much as this reviewer does you’re going to adore Boulder’s Dinner Theatre’s superb production of “Forty Second Street.” Director Michael Duran has paced this perennial favorite with a brisk lively tempo and cast the show impeccably.
John Scott Clough brilliantly portrays Julian Marsh, the hard-edged director  with a heart of gold
Johnny Stewart delivers a great break out performance as the charming Billy Lawlor.
Ali Dunfee’s Dorothy Brock is smashing! Katie Ulrich is a fine Peggy Sawyer. Joanie Brosseau’s portrayal of Maggie Jones is to die for. 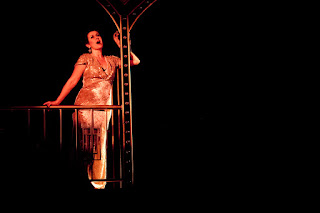 Wayne Kennedy gives us his usual impeccable professionalism as Bert Barry.
Tracy Warren’s doubles up her superb Anytime Annie as the amazing choreographer for the show. Scott Beyette’s strong portrayal of Pat Denning adds immeasurably to the proceedings.
Veteran actor Brian Norber who has played everything from Harold Hill in “The Music Man” to Li'l Abner in er "Li'l Abner" and Man in Chair in "The Drowsy Chaperone" chews up the scenery as an irritating sugar daddy with a big wallet and a bad case of Dunlap’s Disease. His paunch (it’s only a costume) has ‘done lapped’ over the belt dontchaknow.
The ensemble of this show is rock solid. Such actors as Julia Perrotta, Brian Jackson, Bob Hoppe and Brett Ambler enhance the proceedings with chutzpah and panache. Standing out among the newbies in the ensemble at BDT are the likes of Joey Revier, Tracey Zimmerman and Will Hawkins.
Under the baton of music director Neal Dunfee who conducts that luscious BDT stage orchestra those great old tunes sound better than ever. The sound design by Wayne Kennedy somehow manages the impossible keeping the whole evening an auditory heaven with no miking issues.
The set by Amy Campion, costumes by Linda Morken and lighting by Rachael Dugan are all of the high quality one has come to expect at this grand dinner theatre.
And while we are on the subject of dinner let me just say that the pork shanks with which this reviewer indulged himself were of the most scrum-diddilly perfection. My guest for the evening raved on and on over her mouth-watering prime rib.
You deserve to give yourself the gift of an evening of dinner theatre at Boulder’s Dinner Theatre. If you can’t get a ticket during the holidays due to the huge popularity of this show promise yourself you will ring in the New Year with a visit in January. The show runs Through February 16 so you might even want to get tickets early for that perfect Valentine’s Day date. In any case …
Run to get tickets!Marlowe's Musings