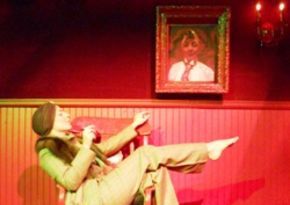 “Sweet Tooth” is a trip to the dentist that could use some more laughing gas.
In the opening scene of Buntport Theatre’s newest creation an eccentric agoraphobic woman, played by the always-brilliant Erin Rollman, is seen trying to make herself believe it’s cold when in reality it’s hot as hell. One of her disciples sprinkles her with water and holds up an electric fan to assist her in her deluded musical affirmation that she is cold when in fact her home is blistering hot.
Her disciples, played by Denver favorites Hannah Duggan and Brian Colonna, live with her in this home, which is entirely red and looks a lot like this reviewer’s memory of the red room in the movie “The Masque of the Red Death.”
Her cult following will do anything to please her even going so far as to have their own teeth pulled when she has a tooth ache. That’s because their mistress prefers “the representation” of dental work to the actual existential manifestation of having her own tooth extracted.
The mistress is fond of sweets and expounds things like: “I can live with the pain as long as I have my taste” and “Don’t drink the Kool Aid.” Get it!  There is a lot of mugging and posing interrupted by intermittent bursts of song. The musical composition by Adam Stone is pleasant enough. It may remind you, as it did this reviewer of the repetitive phrasing of John Adam’s score for his opera, “Nixon in China.” His earlier work with Buntport in “Seal. Stamp. Send. Bang” (not seen by this reviewer) has been referred to as having a “synth pop sound.”
Superb comic Erik Edborg gets the thankless role of a dentist who makes house calls.
The piece is an extended hallucination that if one puts an existential premise in a blender along with intermittent references to contemporary music while adding an overlong homage to absurdist theatre tedium will not prevail.
This reviewer was ready to leave at Intermission, but discovering that there was a second act returned dutifully to his seat for the somewhat shorter grand finale. To paraphrase the playwright(s) the effect was something akin to “comparing apples to orchards.”
The work that Buntport does is nearly always deliciously toothsome. Here the imaginative and overlong injection of theatrical Novocain just brings on the yawns.

See it if you must.