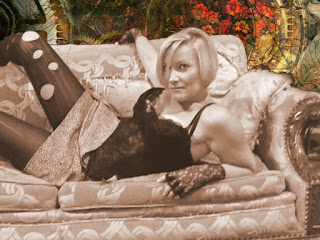 Megan Van de Hey as Jenny
Megan Van de Hey is outstanding! Whenever she is onstage the show rocks! When she is offstage one yearns for her reappearance. Van de Hey portrays Jenny, the role played by Lotte Lenya at “The Three Penny Opera’s” premiere. Ms. Van de Hey consistently delivers her vocals –especially “Solomon Song” –with a skill and brio, which is sometimes lacking or at least inconsistent in the performances of other members of the cast. When this actor is onstage it’s impossible to take his eyes off her. One feels cheated when she is shuffled-however correctly- into the back row of dancers. Whether she is walking the tightrope of the small wall separating the stage and the audience or telling a man in the front row, ”Don’t be shy,” while facing him upside down in a dip provided by the arms of Rich Cowden’s McHeath, this artist dazzles us.
Don Deveux (Mr. Peachum) did well in his singing of the a cappella rendition of “The Song about Human Futility,” which was arranged by Music Director Boni McIntyre.
Robert L. Gale’s Minstrel of Many Voices is exceptional. This musician accompanies the actors onstage playing everything from accordion to bassoon along with Donna Debreceni’s keyboards.
Rich Cowden’s McHeath is well sung and acted. One of the highlights of the show is “Cannon Song,” Cowden’s and Verl Hite’s (Jackie ”Tiger” Brown) exuberant duet.
Mel Horton really unleashes her voice in the role of Mrs. Peachum in the scene in which she enlists Jenny’s aid in betraying McHeath.
Left to right: Juliette Peterson, Rich Cowden and Erica Lyn Cain

Juliette Peterson (Lucy) sports a superb soprano. So does Erica Lyn Cain (Polly.) “Jealousy Duet,” their operatic catfight, gives both artists a chance to show off their fine set(s) of pipes.
Michael Ingram and Daniel Traylor turn in good performances in supporting roles.
Although no one is credited with the choreography in the show, there is some and it is sometimes too big for the stage. In one moment Mr. Deveux was unable to complete a move because he had come to the end of the playing space and simply had to drop the intended stage movement.
The show succeeds in its garish depiction of the underbelly of society, which is well established visually with the tawdry costuming (Erin Leonard), grave-digging choreography and eye sore of a poster-splattered brick and corrugated steel scenic design (Richard L. Pegg.)
Director El Armstrong nails the play’s core concept, that ‘the lack of money’ is the root of all evil’ superbly. One might, however, wish for a quicker pacing of the relentlessly vulgar proceedings.
Brecht and Weill’s works are intended to put forth philosophical ideas about society’s flaws more as simple straightforward polemic rather than any kind of an entertainment. One goes to this work knowing that Weill’s and Brecht’s “opera” is the antithesis of most of today’s musicals that wish only to be the most popular ‘entertaining’ fluff.  Whether one is a fan of this show or not – and I must confess to not being one of its greatest aficionados- the vocals need to be well sung. Those of Ms. Van de Hey are such a banquet of brilliant virtuosity that the other cast members’ acting and singing suffer by comparison. One must admit to a longing for the operatically trained voices in Central City Opera’s production of this work several seasons ago as well as of their 2011 production of “The Seven Deadly Sins,” which was the last collaboration of Weill and Brecht.
Marlowe's MusingsThe lighting design done for Miners Alley’s production by Karilyn Pytel and Jonathan Scott-McKean is good for the most part. However … one wishes that there were more of an effort to create the look of those distorted faces in the paintings of the German expressionists of this period such as James Ensor. Possibly that could have been achieved as it was some years ago at Central City Opera with the use of footlights.
Although older theatergoers may find flaws, “Three Penny Opera” virgins will be enthralled.
Sept 7 – Oct 21
Fri. and Sat. @ 7:30 and Sun @ 6pm (Sun. Oct. 21 @ 2pm only, no 6pm that day)
www.minersalley.com
Miners Alley Playhouse, 1224 Washington Avenue (13th and Washington 2nd floor entrance on 13th) in Golden, CO.