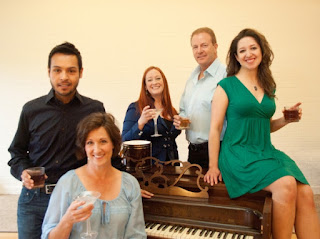 To quote lyricist Oscar Hammerstein, the musical revue currently being produced by The Cherry Creek Theatre Company at The Shaver-Ramsey Show Room is indeed ‘some enchanted evening.’

What else could it be with a fine director like Bernie Cardell and a cast that boasts such names as: Stephen Day, Boni McIntyre, Susie Roelofsz, Zachary Shannon and Angela Mendez.

“A Grand Night for Singing” was nominated for two Tony Awards, for Best Musical and Best Book of a Musical, and the Drama Desk Award for Outstanding Revue.

Stephen Day, who has received two Henry Awards for Javert in “Les Miserables” and Max in “Sunset Boulevard”(both at The Arvada Center), has been nominated for this year’s Henry Award for his portrayal of Molokov in The Arvada Center’s magnificent production of “Chess.”
Day is an internationally sought after musical theatre actor who has recently performed the lead in “The Drowsy Chaperone” in Toronto. You may have heard his exquisite work as soloist with the CSO when Marvin Hamlisch conducted.

Boni McIntyre has received critical acclaim for her outstanding portrayal of Abigail Adams in Performance Now’s recent production of “1776” as well as for her acting and singing in Miners Alley Playhouse’s awe-inspiring production of Terrence McNally’s “Master Class.”
All five actors revel in the chance to bring us those glorious old Rodgers and Hammerstein favorites from the golden age of the American musical theatre.
The arrangements of the forty Rogers and Hammerstein classics in this revue are thoroughly engaging and the accompaniment by Rob Lowe divine.

These unforgettable songs come from such shows as “Oklahoma,” “Carousel,” “State Fair,” “South Pacific,” “Flower Drum Song” and “The Sound of Music.
“There are even a few songs from a few shows by this famous duo that are hardly ever seen: “Pipe Dream,” “Allegro” and “Me and Juliet.”
If you’re looking for a relaxing evening that’s pure unalloyed pleasure and enjoyment you can’t go wrong taking a trip down memory lane with these five fine vocalists and the Rodgers and Hammerstein songbook.