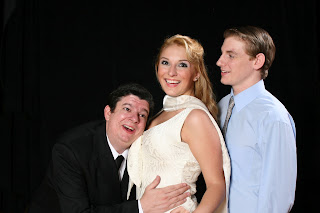 Town Hall Arts’ production of Mel Brooks’ “The Producers" is the kind of production that makes one wish they (Town Hall) could cancel all the shows on their calendar and just run this show forever! 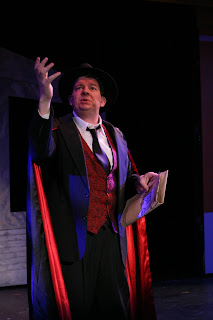 As directed by maestro Bob Wells the show is a non-stop laugh riot from curtain to curtain. The musical for which Mel Brooks snatched up Tonys in every musical theatre award category except for Best Supporting Actor, is deliriously funny.

Tim Howard is superb as Leo, the book-cooking accountant Max enlists to be his partner in crime.

Nicole Campbell’s blonde bombshell of an Ulla, is a knockout!

Besides the sidesplitting work done by  Cardell, there are supporting actors who will split your sides and demolish your funny bone. 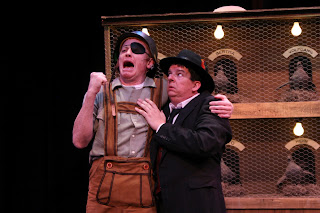 Left to right: Eric Mather and Bernie Cardell
They are: Eric Mather as Franz, the pigeon raising hack of a playwright bent on rewriting History to show Adolph Hitler in a positive light; 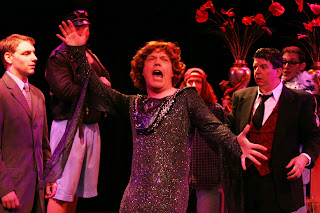 Christopher Willard as Roger Devries, “the worst director in town” who winds up playing Der Fuehrer as a flaming gay twit;

Liam Speros, Roger’s adoring boyfriend, who can traverse the stage in one balletic leap to answer a doorbell chiming “I Feel Pretty.”

Kevin Doherty is hysterically funny as a by-the-book head accountant whose entire physiology threatens to explode when an employee arrives late for work.

Kelly Katz’s choreography catapults this cast of conniving conmen into a kaleidoscope of colorful collusion. All alliteration aside, this is choreography that will astonish you! Brava! 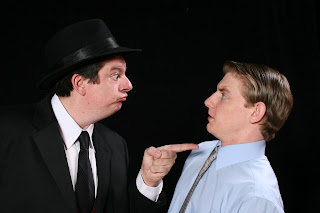 Linda Morken’s costumes are a stitch!

Donna K. Debreceni’s music direction is, as always, the stuff of dreams!


Ticket Information:
Reserved seat tickets are currently on sale, priced $21.00-$38.00 at the Town Hall Arts Center box office, 303- 794-2787 ext. 5 (M – F, 1 – 5 pm) or on-line at www.TownHallArtsCenter.com . In a continuing effort to make plays at Town Hall Arts Center accessible to all, ten value seats at $10 each will be made available on a first- come-first-served basis one-hour prior to each published curtain time.