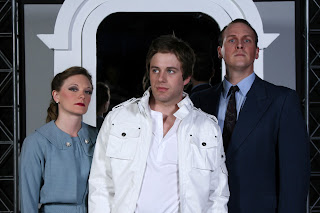 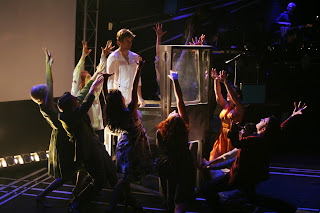 Russell Mernagh and the ensemble of Tommy at Town Hall Arts 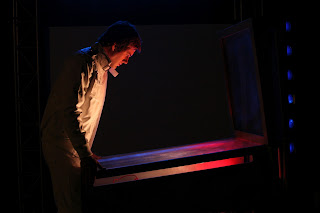 Russell Mernagh as Tommy
The Who’s “Tommy” has never been a huge favorite of this reviewer. However …
Master magician and miracle worker Nick Sugar can turn what a reviewer considers dross into gold in a heartbeat. What Nick Sugar proves over and over again is that no matter how much a theatergoer may feel he dislikes a certain musical, his (Sugar’s) direction can turn that theatergoer into a raving fan thereof in a nanosecond. He’s done it with countless shows, and he’s done it again with “Tommy.” Often the big touring companies present this rather slim and intimate story in the grandiose framework of a multitude of television screens complete with interminable visuals of a robotic martial choreography. Prior to seeing Sugar’s production of The Who’s “Tommy” the CD for this show had been relegated to the dusty back row of the musical CD shelf. Afterwards it has returned to an honorable place of the top-drawer variety. Like Sugar’s outstanding production of “Rent” at Town Hall this show had me and my guest for the evening turning to each other and whispering: “I CAN’T WAIT TO SEE THIS SHOW AGAIN!” (The caps indicate intensity not loudness.) Sugar paces his outrageously successful show at a gallop that makes it seem like it’s over WAY too soon. Director Sugar seems to be telling his audience: “Slam, bam! You’re welcome, Ma’am.” What’s more exciting is that unlike The Arvada Center and the theatres downtown in the Plex; Sugar does it with hot, young, local talent! Indeed this production delivers an explosion of talent!
Russell Mernagh’s outstanding performance in the title role is filled with outrageously well-sung vocals that are absolute knockouts. It is to be hoped that after Mernagh’s tours de force in “Rent” and “Tommy,” this fine young artist will continue to be cast in many musicals throughout the region.
Matt LaFontaine turns in a performance of the sadistic bullying Cousin Kevin that is so studied and intensely powerfully delivered you can’t take your eyes off him. Mr. LaFontaine is an actor of consummate artistry whose work is brilliant and breathtaking.
Ashlie-Amber Harris is mesmerizing as the Gypsy.
Lisa Finnerty is superb as Mrs. Walker.
Markus Warren (Enjolras in Arvada’s “Les Mis” and The Phantom in BDT’s production of “Phantom”) turns in a flawless portrayal of Captain Walker.
Rob Janzen’s smarmy abusive creep of an Uncle Ernie is character work nonpareil.
Keegan Flaugh sounds spectacular as a Specialist brought in to treat Tommy.
Dakoda Hubert delivers a genuinely fine performance as the Young Tommy.
The choreography by Nick Sugar is utterly unbeatable. Here even the fluid moving of Tina Anderson’s sensationally well-crafted fragmentary scenic design is done in a near balletic style that is smooth as buttah.
Musical director Donna K. Debreceni, the most animated conductor in Colorado, delivers the rock em sock em instrumentals from her above stage band with ear-pleasing professionalism. How lucky can we get?!!!!!!!!!
Jonathan Scott-McKean’s lighting design creates a DAZZLING array of visuals to enhance the constantly shifting moods of the piece. This light show is astounding!
John Rivera’s sound design is his usual excellent professional work.
Hopefully you can still get a ticket.
Not to be missed.
Town Hall’s production opens April 6, 2012 through May 6, 2012. Show times are Thursdays, Fridays & Saturdays at 7:30 p.m. (& 2:00 p.m. on 4/21) & Sundays at 2 p.m. ( & 6:30 p.m. on 4/22).
Ticket Information:
Reserved seat tickets are currently on sale, priced $21.00-$38.00 at the Town Hall Arts Center box office, 303- 794-2787 ext. 5 (M – F, 1 – 5 pm) or on-line at www.TownHallArtsCenter.com . In a continuing effort to make plays at Town Hall Arts Center accessible to all, ten value seats at $10 each will be made available on a first- come-first-served basis one-hour prior to each published curtain time.
Posted by David Marlowe Theatre Reviews at 5:24 PM