The Taming of the Shrew

The Taming of the Shrew
The Stage Theatre: 1/27 – 2/26
The Denver Center Theatre Company is to be commended for its fine production of “The Taming of the Shrew.” Director Kent Thompson has done a superlative job in casting this show. From the leads to the walk-ons, nearly everyone is stellar. Thanks to Thompson’s eye for talent, the cockiest Petruchio since Richard Burton is now onstage in this hilarious production. John G. Preston is a magnificent swaggering swain of a Petruchio. Kathleen McCall does well in translating Shakespeare’s Kate to the 1950s. She first appears as a cook whipping up some unknown Italian dish in her father’s Italian Ristorante. If Mr. Preston’s brash conceited Petruchio brings up pictures of the swaggering cowboys of the silver screen in the fifties, McCall’s Kate may remind you of Debbie Reynolds’ feisty performance of  “I Ain’t Down Yet,” in the film version of “The Unsinkable Molly Brown.” McCall’s portrayal differs, however, in that it’s all swinging and no singing. Though McCall’s onstage brawl with Mr. Preston is feisty, it never quite reaches the zenith of mayhem Taylor and Burton did in the film directed by Franco Zeffirelli. Nevertheless, once McCall arrives at her reconciliation speech in the play’s denouement she is nothing short of brilliant. She lands somewhere north of Elizabeth Taylor’s sensual reading of Kate giving it a heartfelt poignancy that touches us. Christy McIntosh’s portrayal of Kate’s younger sister, Bianca, draws upon the memory of such actresses of the fifties as Sandra Dee. You know. An annoyingly cheerful airhead. Drew Cortese is brilliant as Lucentio. Matt Zambrano is quite simply the best character actor now onstage at the Denver Center. His performance could translate quite effortlessly to Broadway. Andrew Schwartz’s portrayal of Petruchio’s groom, Grumio is wildly entertaining. In the sensing that you may never see a better Petruchio than that of Mr. Preston, you also may never see as engaging and entertaining a Grumio as Schwarz’s. Bravo! Robert Sicular is hilariously endearing as Kate’s father, Baptista. There is also some fine funny work by Mike Hartman first as Petruchio’s servant, Nathaniel, and then as Vincenzio, father to Lucentio. Thompson has engaged the superb talents of costumer Susan Branch Towne, sound designer Craig Breitenbach, and scenic designer David M. Barber. Mr. Barber has created a sort of panoramic set featuring Baptista’s Ristorante in Act One and Petruchio’s man cave in Act Two. Brilliantly designed mock fifties billboards flank the stage advertising products with tongue in cheek referencing of Shakespeare’s other plays. A few examples are: “Portia Face Soap,” “County Paris Quality Ties” and “Puck Cola.” Controversial to the max by today’s standards with regard to its vision of the inequality of the sexes, director Thompson’s setting the play in the 1950s is a directorial coup. This Kate however tries awfully hard to not wind up another June Cleaver. However… since the roles of men and women were vastly different in the late sixteenth century, the chauvinist pig wins hands down.  As a result male patrons may leave the theatre in a bit more arrogant mode and the ladies bristling.
Not to be missed! 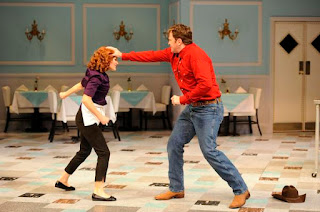